STAND FOR LIFE IN OPPOSITION TO THIS EXTREME ABORTION BILL!

The NSW Parliament is about to legislate for abortion on demand till birth, one of the most extreme abortion laws in the world. The Bill was pushed through the Legislative Assembly and will be debated in the Legislative Council from Tuesday, 20 August.

Join us in peaceful protest against this radical proposed legislation.

WHEN: Martin Place (Macquarie Street side)
TIME - 6pm until 9pm (including vigil outside NSW Parliament)

Under this Bill:
- Children can be aborted for any reason right up till the final moments of a pregnancy;
- Amendments to protect children who survive botched abortions attempts were defeated;
- There are no safeguards to prevent targeted abortion based on gender or disability;
- Doctors and medical staff are compelled to participate (by referral) in the taking of an innocent life.

This Bill was ambushed on Parliament, with no consultation, in an attempt to curb community backlash.

This is our last opportunity to fight against this extremist Bill. We need you there. 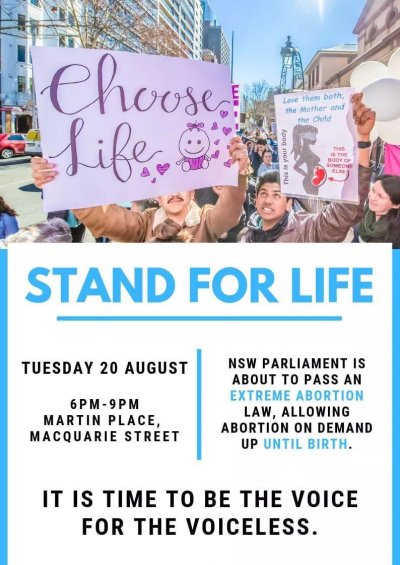